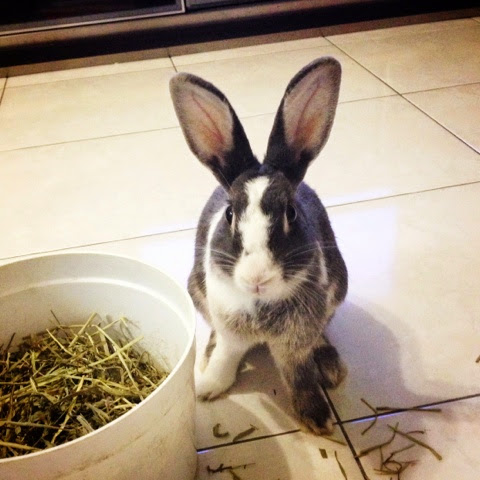 Hi every bunnies in da world! Bunny's mama promised to update the blog but she failed. Bad mama! bad mama! But mama never forgets to feed Bunny.. And even bring Bunny a friend home! 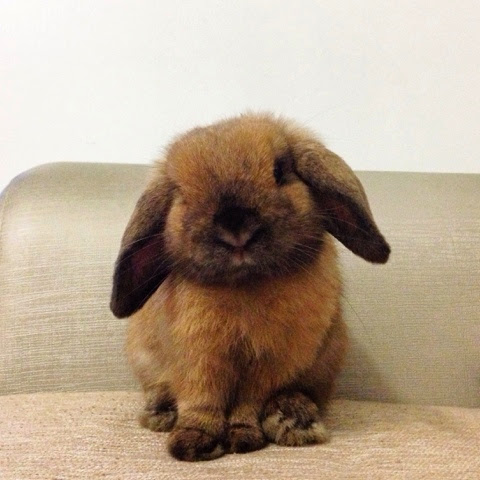 Every Bunnies, please say Hi to Boots! Boots is a buck. He is the cutest gangster in the the town! 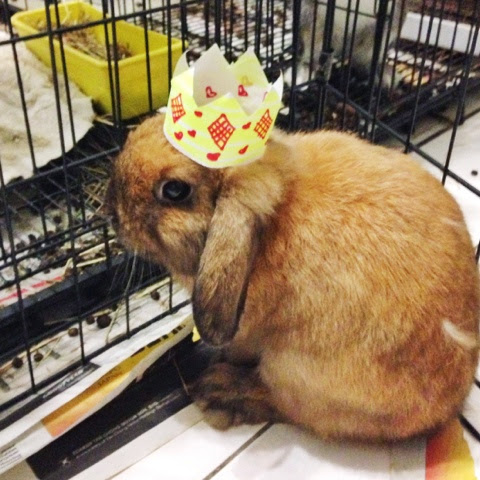 Boots is just 1 years old. His birthday is on 1st December 2013. He's very unpredictable, runs fast like a lightning bolt and has temper. At this moment, we have no idea what is his favourite food. He doesn't seem to have extra interests on carrots, bananas and oranges. So, ended up Bunny always steals Boots food. Kekekeke...

Boots doesn't like Bunny too. Bunny doesn't like Boots too. Mama says we must get along for Chinese New Year because Boots and Bunny have to go for a car ride! Then Bunny and Boots become friends now, so that we can stay together next time.

Posted by MsXeRoZ Nicole at 2:42 PM No comments:

The clock stroke twelve midnight, and I am still not asleep. I had to boil water for tomorrow and while waiting for my kettle to whistle, I lay on the couch. I listened quietly. There was sounds of the passing vehicles, and noises from the LRT construction site nearby. There was also sounds of the night crickets. I listened...and listened... 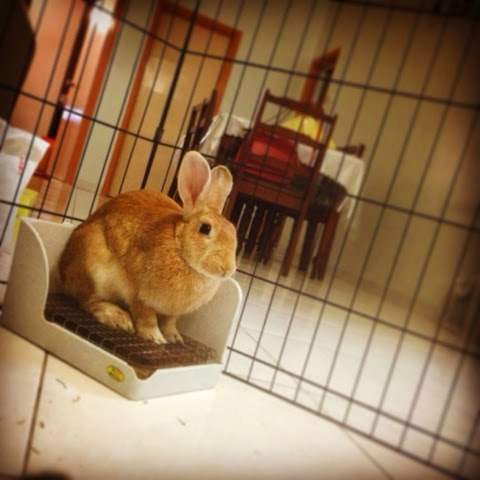 I was hoping to hear the sound of the gushing pee, or sounds of hay being bitten, or at least the creaks of the cage. Empty... The large cage inhabited by the two renowned rabbits, Fluffy & Bunny lies empty. Silent...
Fluffy had succumbed to her G.I disease last two months. We coped with her departure by channeling our grief into loving, caring, nurturing little Bunny Boy. Bunny was coping really well, along with us. We spend the night letting him roam free, giving him occassional treats, letting him on the sofa, watching television with us. He was an avid follower of humans. My guess was that he did not know what to do, he wants to play with us. Bunny has always been a timid one. It took us years to gain his trust. Before this, he will mimic Fluffy's actions. He dislikes human touch and was very sensitive to unfamiliar noises. Fluffy's departure also marks the beginning of a new relationship benchmark between Bunny and us. 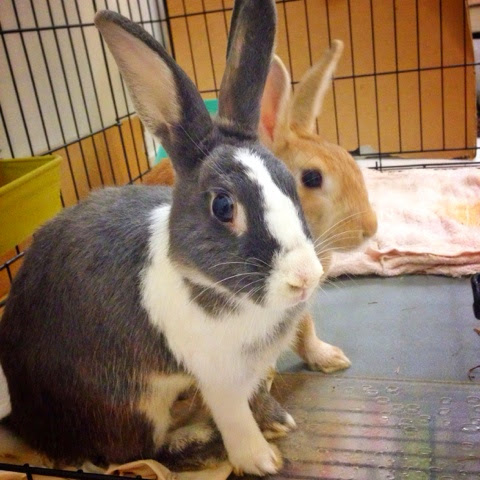 As much as I am enjoying all the kisses and cuddles from Bunny, I miss Fluffy terribly. I miss her lovely eyes, her occasional winks and her bites! I miss the way my bunnies chased each other playfully! I missed them both even more now that Bunny goes for his annual vacation at his daddy's house.
I always thought that Fluffy and Bunny were just pets. Never did I know that this two little creatures had a lot of love within their tiny body. They taught me humour, responsibility, anger management, and many more. They no longer appear as 'just pets' to me. They are FAMILY, and family stays together no matter what happens!
Narrated by Fluffy&Bunny's mama.
Posted by MsXeRoZ Nicole at 1:12 AM No comments:

Fluffy and Bunny came into our lives on 28th January 2011. They were very small, and XeROz bought them from a pet store. These two rabbits caught his eyes, and he bought them for me.
(Note: please do not buy from a pet store, there are a lot of rabbits waiting to be adopted) 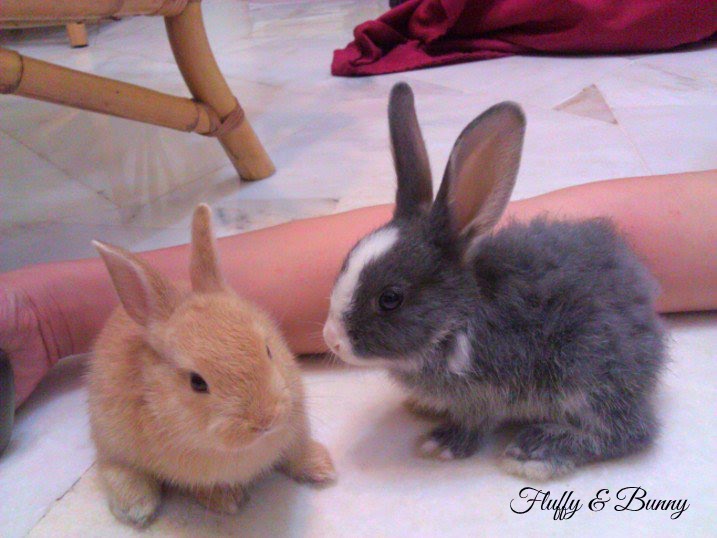 Fluffy was golden brown, and very friendly when she started living with us. She eats almost everything and was so lovely. She runs and she hops happily, it was really a happy rabbit. 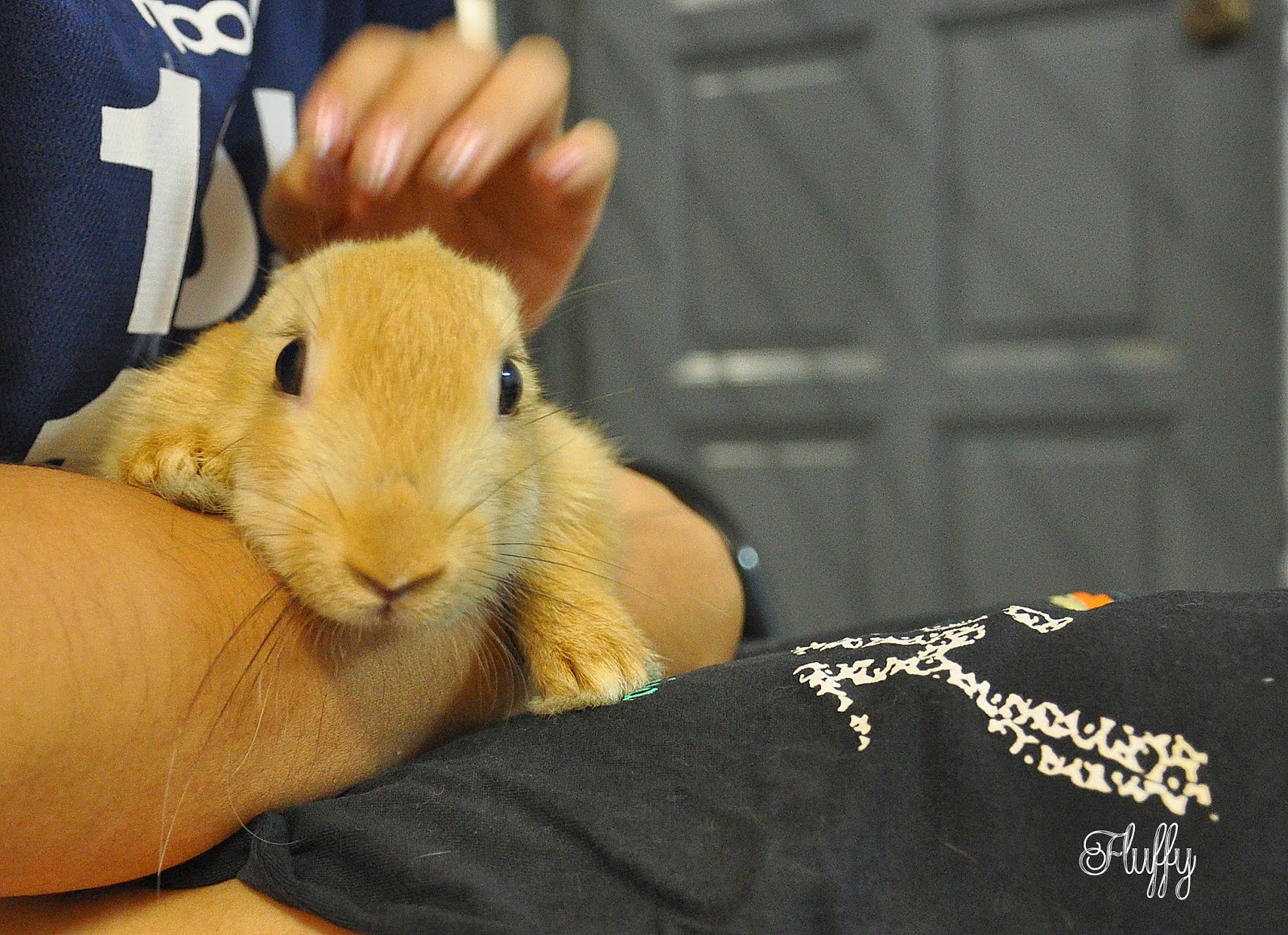 Fluffy became really mischievious during here teenage months. She sneaks like a theif, runs like an athlete, she was really super active. It was tiring just to catch up with her. Very often she bites our cables and wires. Some of the wires even short-circuited, and sparked, but she hopped away unscathed. We were really worried about her, especially when we wanted to entrusted her to be a free-roaming rabbit. 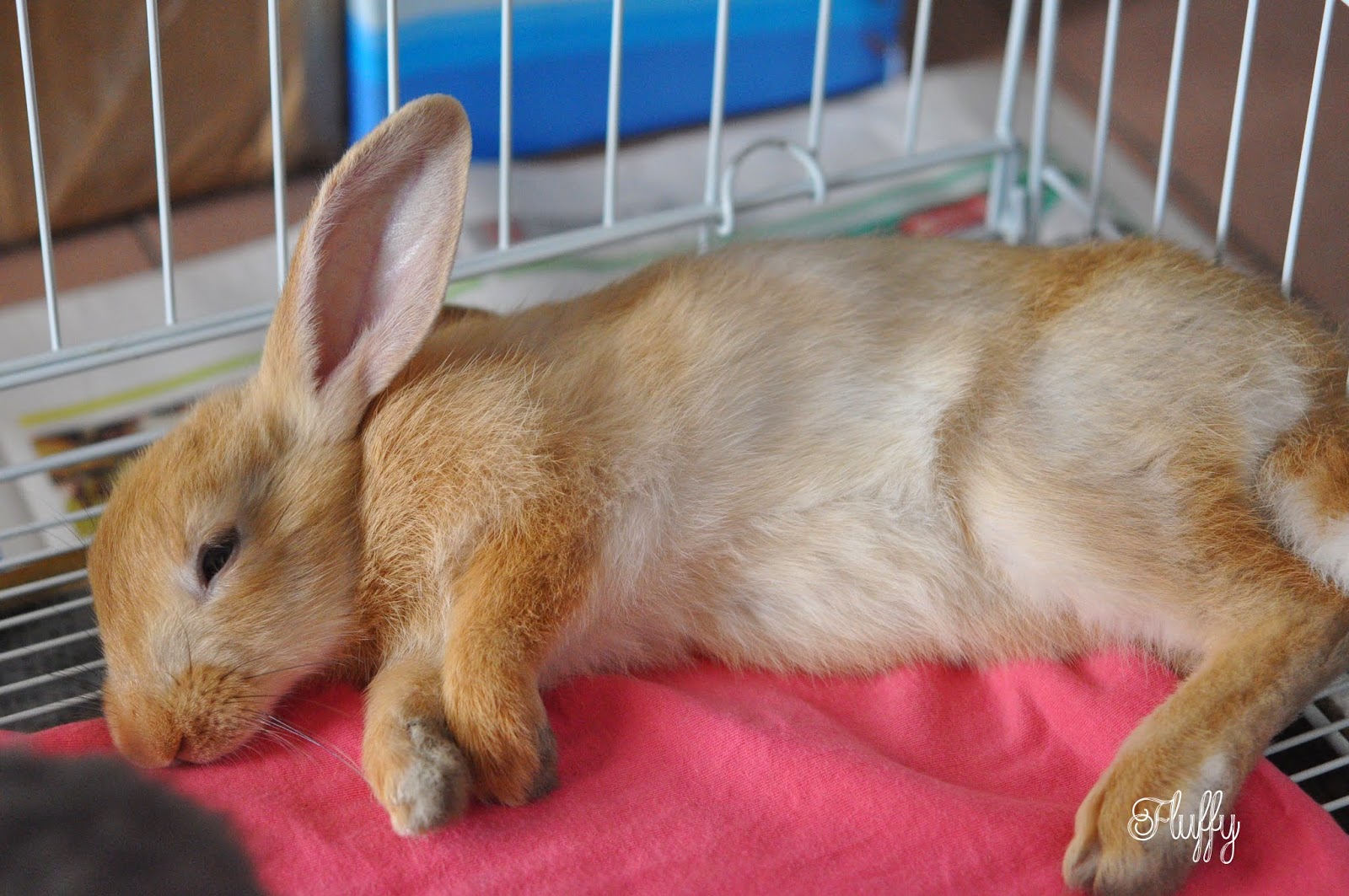 She will always run herself tired and doze off like this! 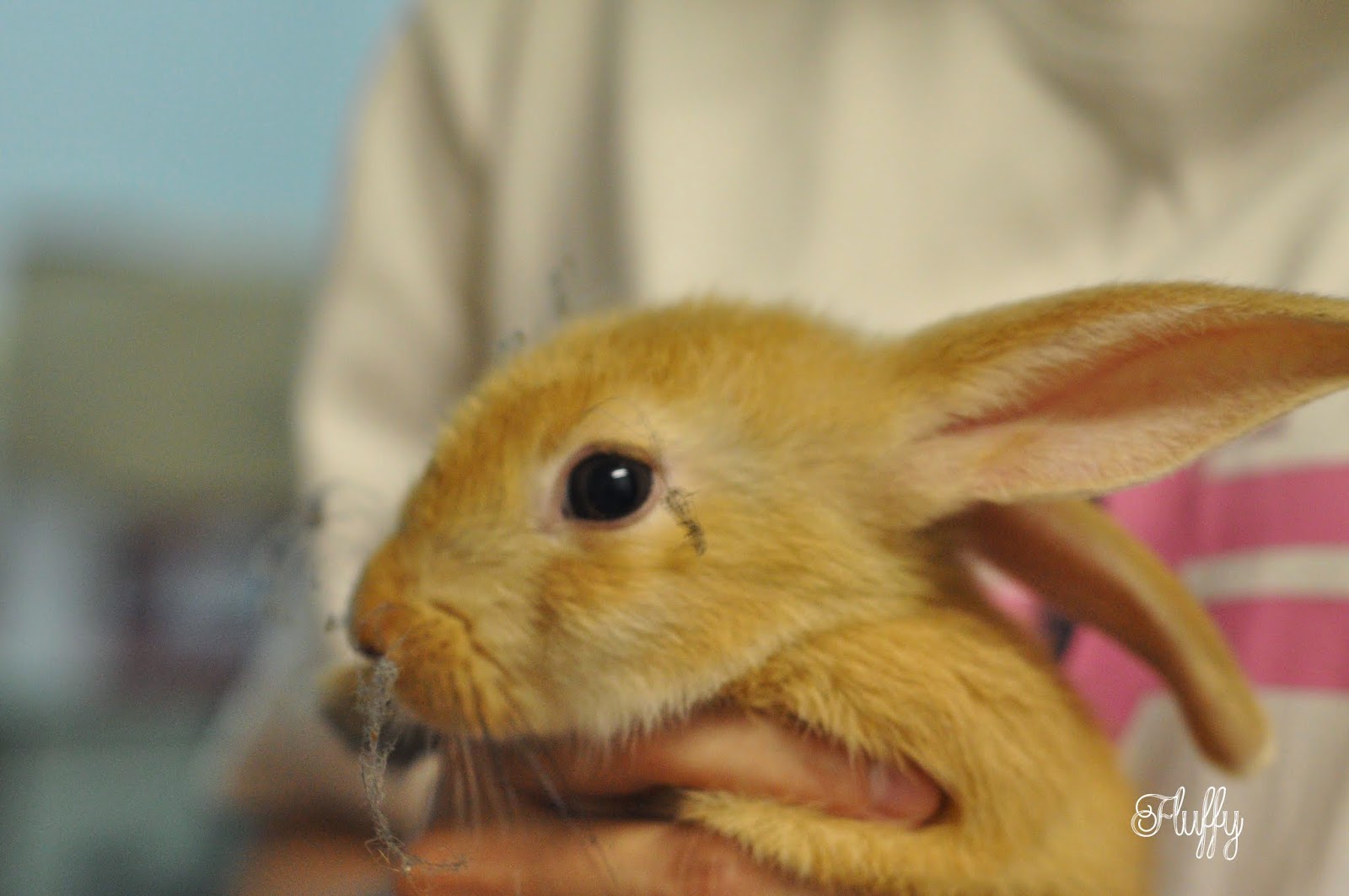 There was once, me and Redbuttockz thought that we had lost her. She was missing for quite some time. We were calling "Fluffy! Fluffy!" and we asked Bunny to help look for her. Bunny was pretty hopeless in such cases. Haha! Finally she came out looking like this. Holy Christ! Fluffy, where have you been?

She went underneath the fridge! Thank God she wasnt electrocuted and die, as we wouldn't have found her! 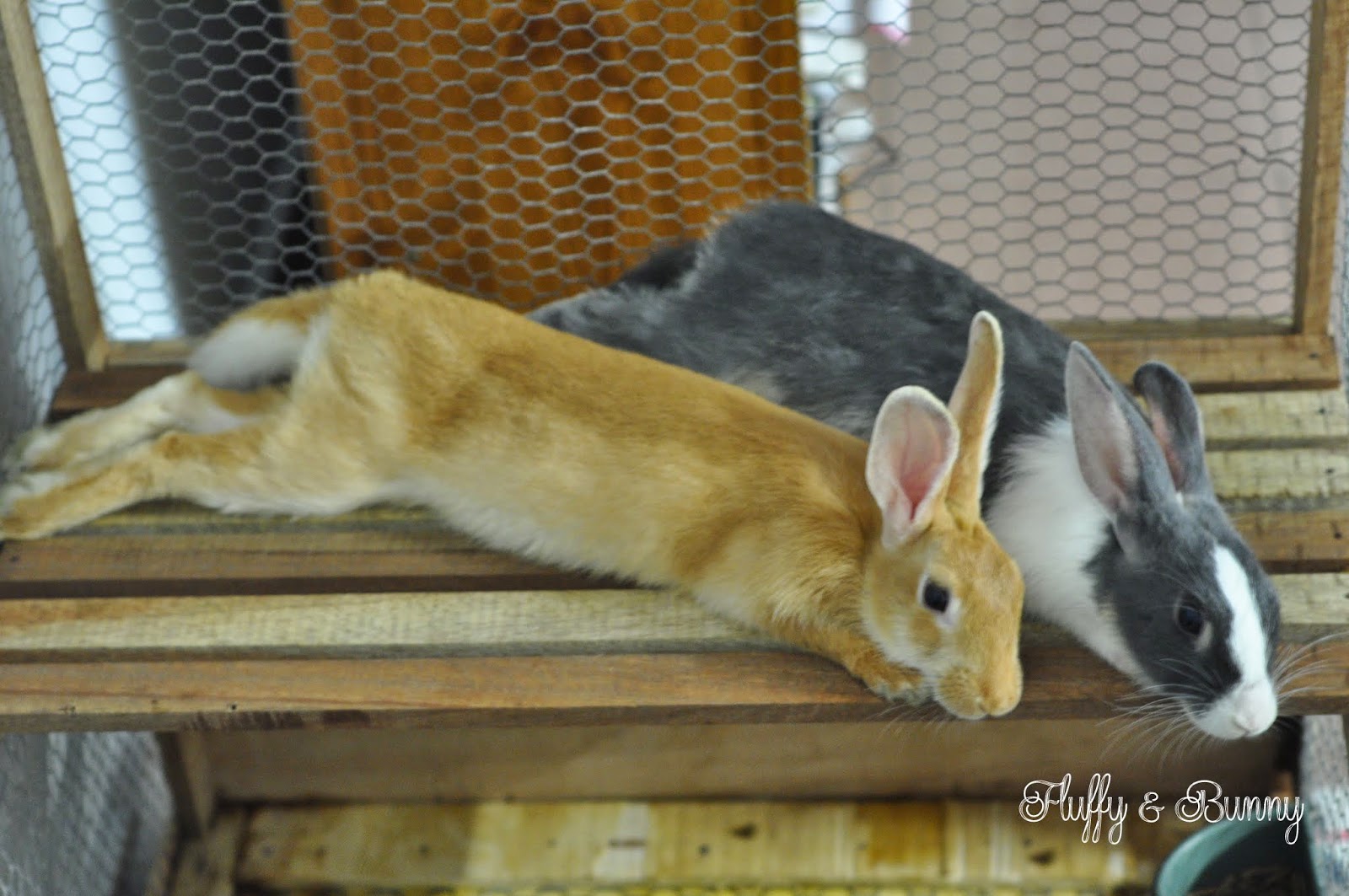 Fluffy and Bunny grew up together, sleep together... 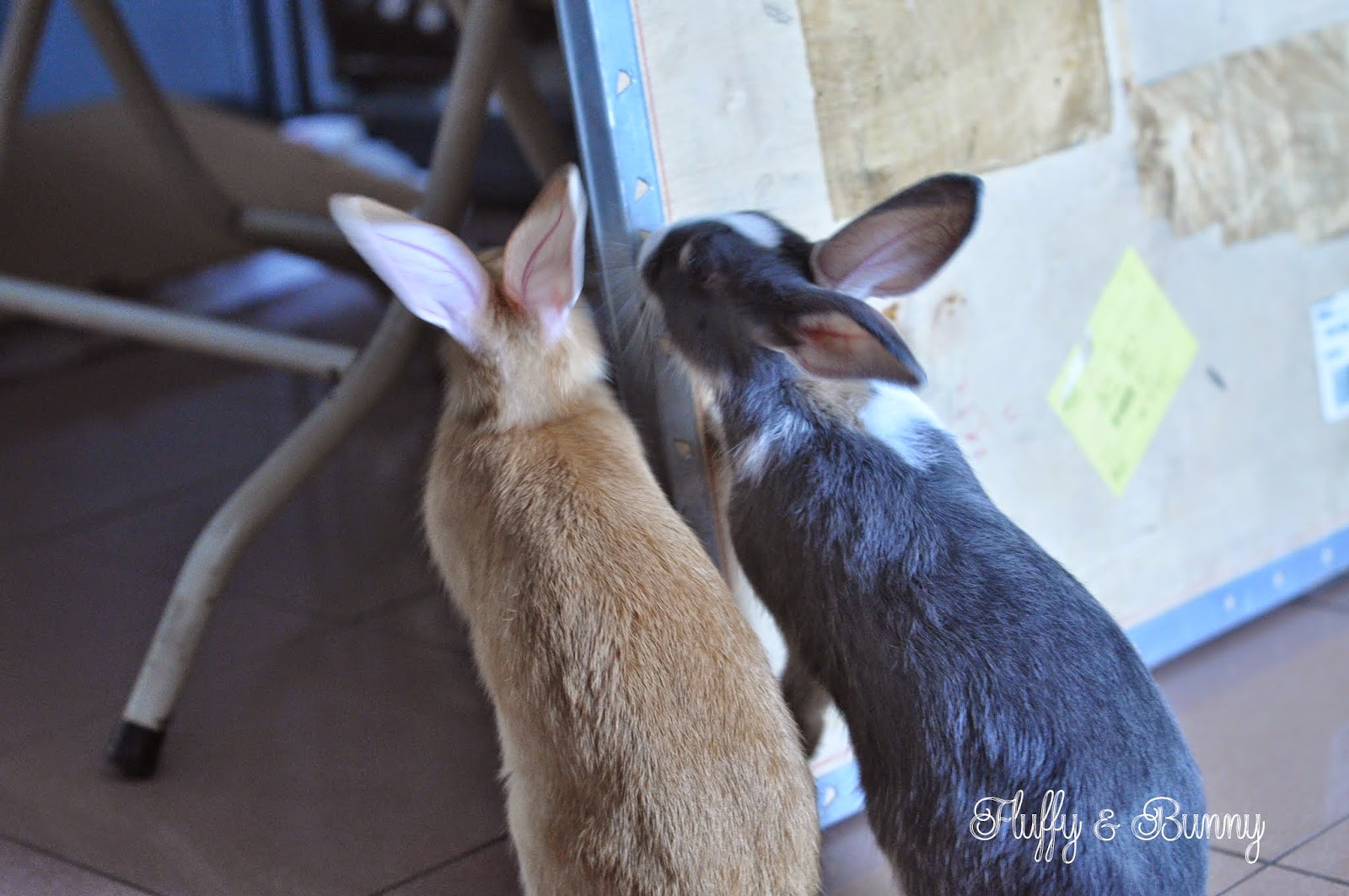 They played together as well... 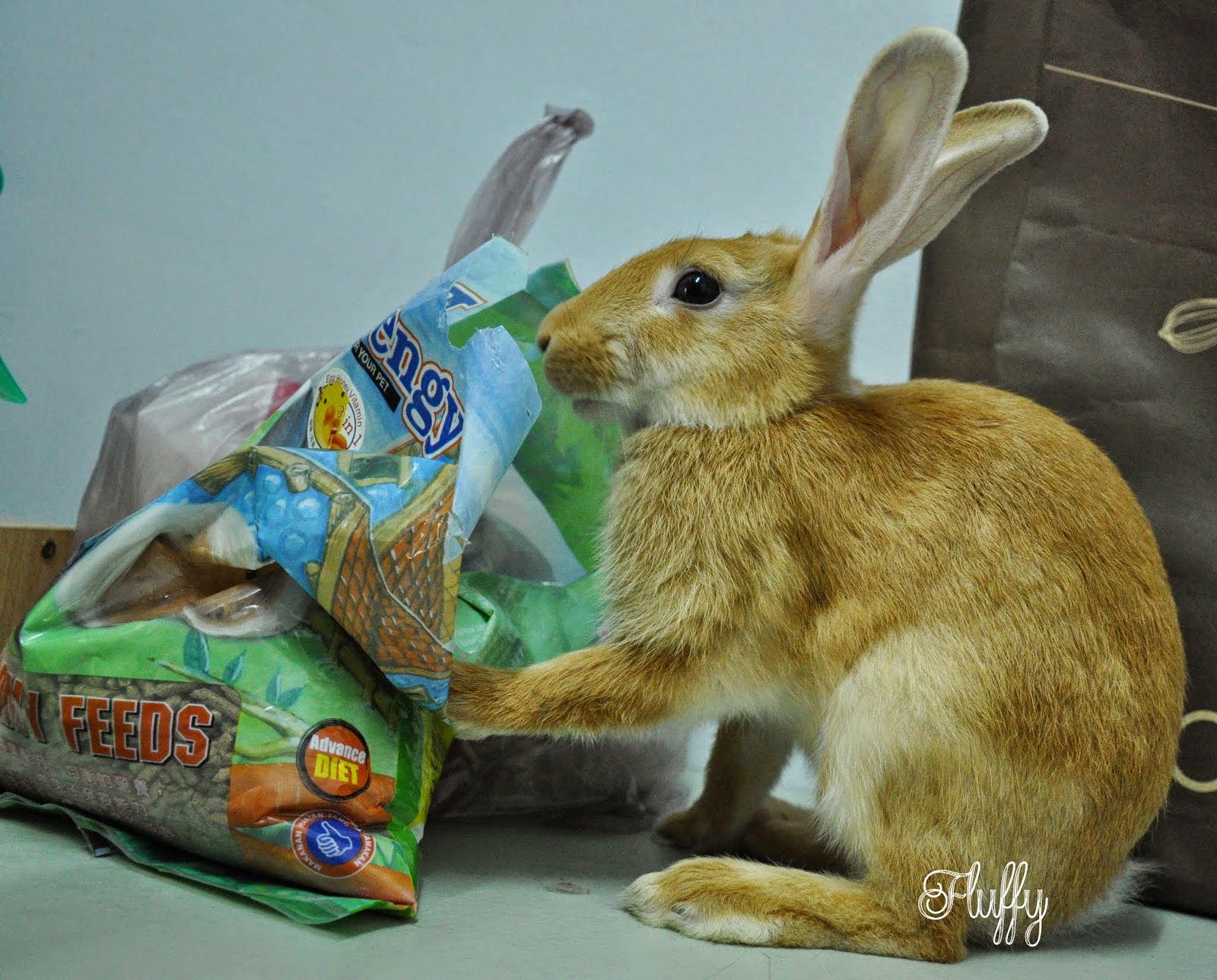 Fluffy have always been smarter than Bunny. She was the first to be able to find a way on top of her food storage table. She would flip the plastic open and eat her heart out. 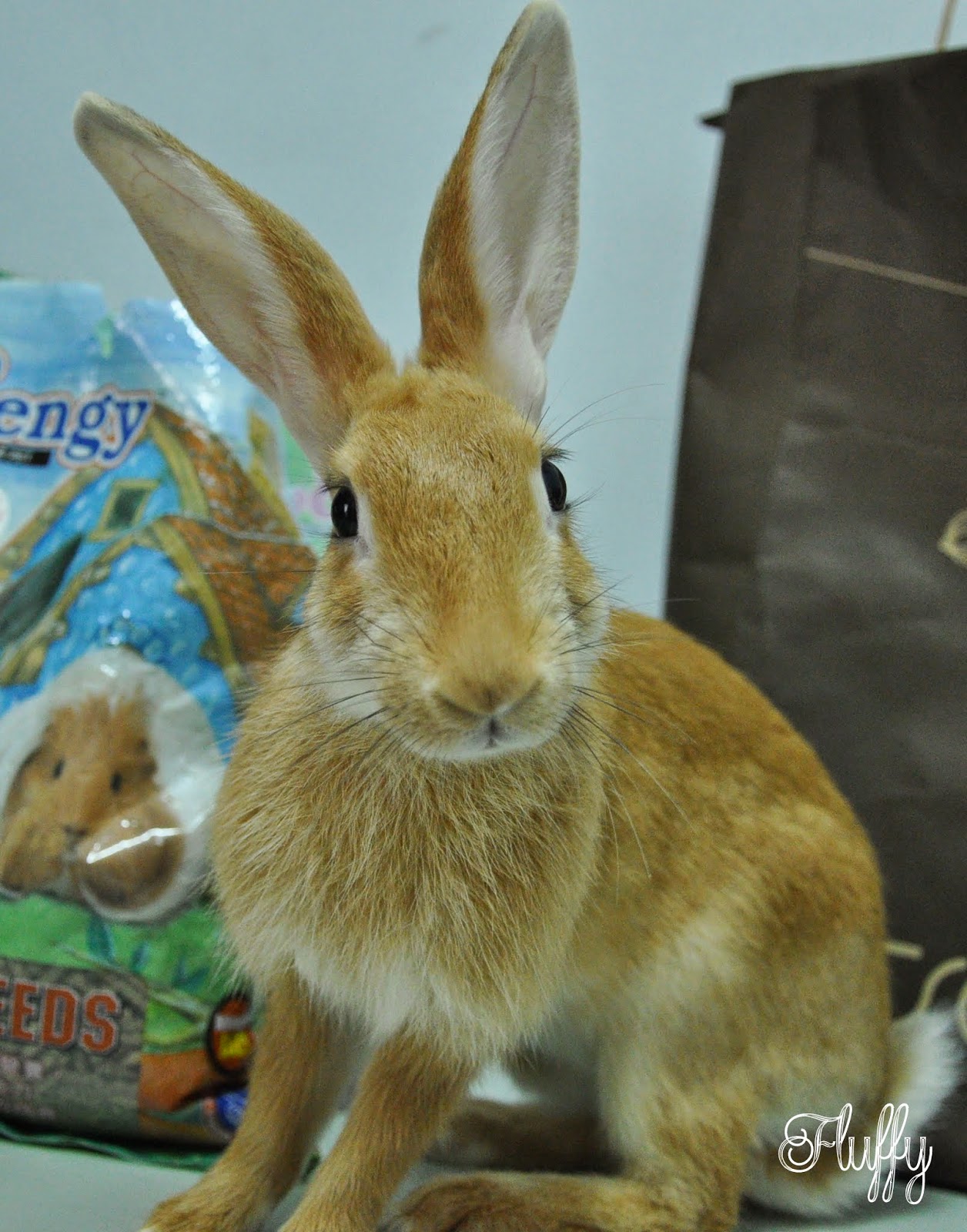 and when we scold her, she would stand still, looked at us, and gave us this face. We forgave her immediately! 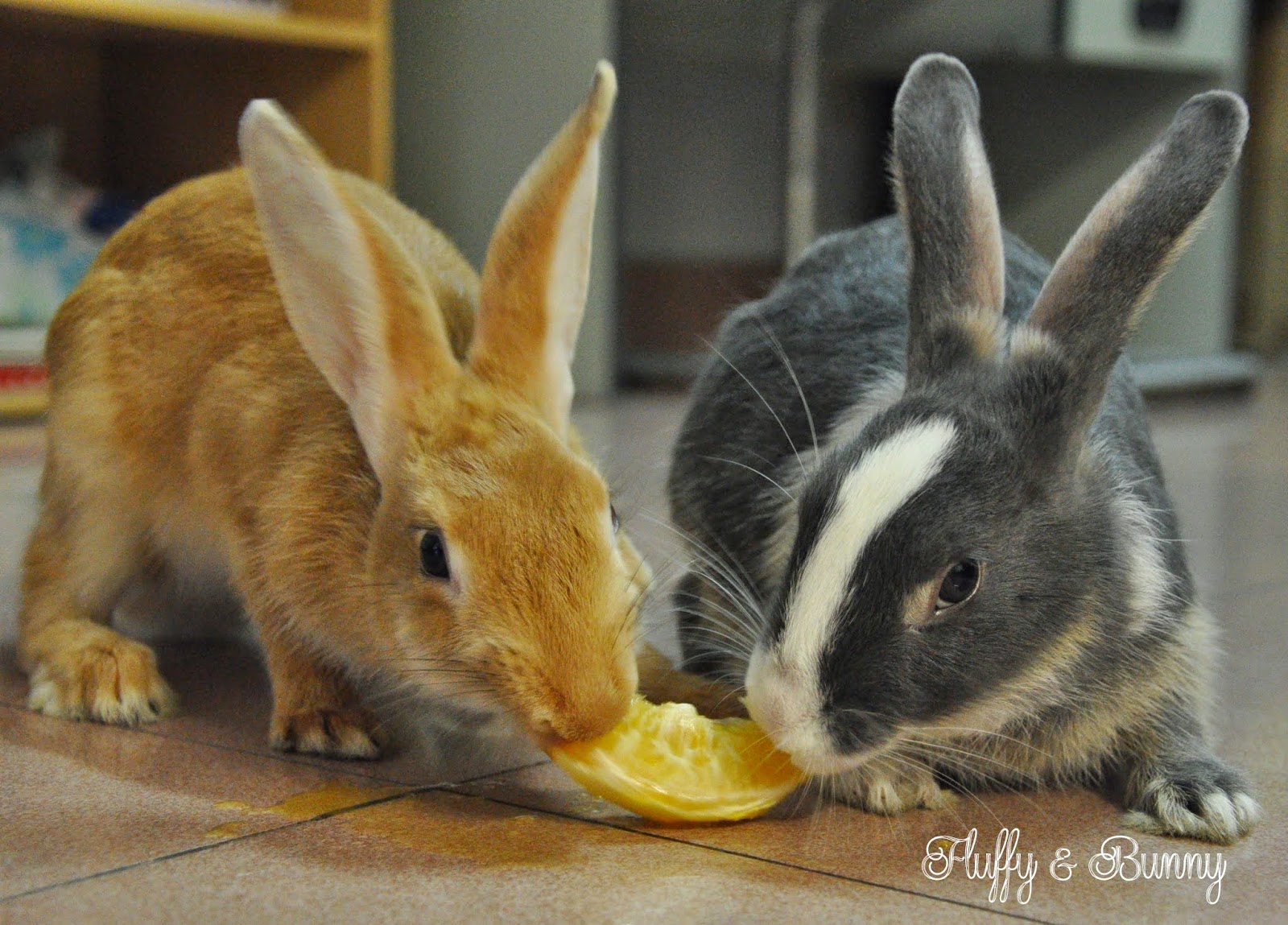 Fluffy and Bunny sharing their treats. We always make sure to give them some treats to make them happy. 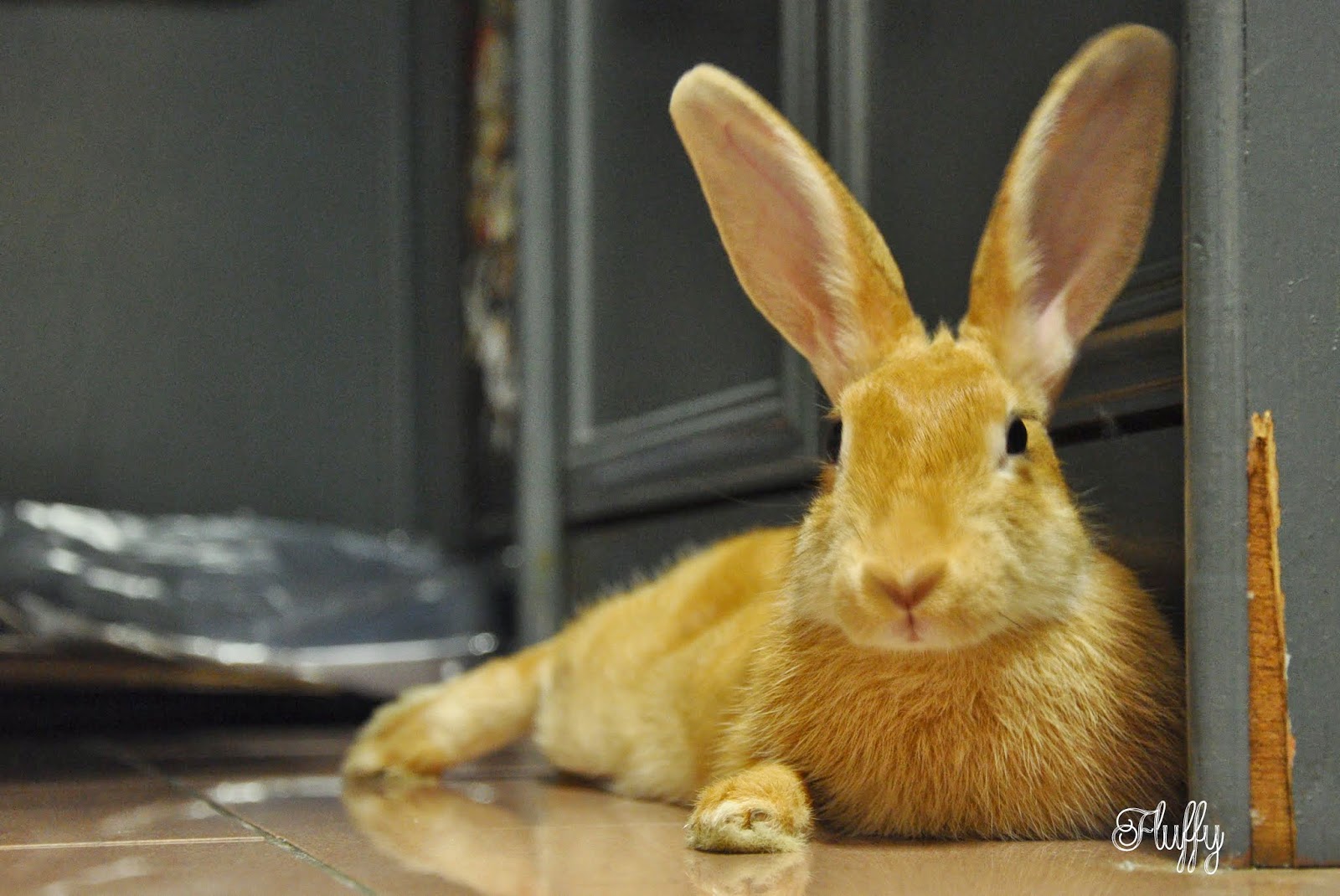 Fluffy can also wink. She sometimes wink especially when we talk to her. I wonder if she understands what we were saying to her. Well, she's really intelligent.

How would you imagine Fluffy to be in Year 2? She grew tremendously, and we then moved to our home. Fluffy and Bunny of course, moved along with us too! Stay tuned for more stories.


Posted by MsXeRoZ Nicole at 7:50 PM No comments: 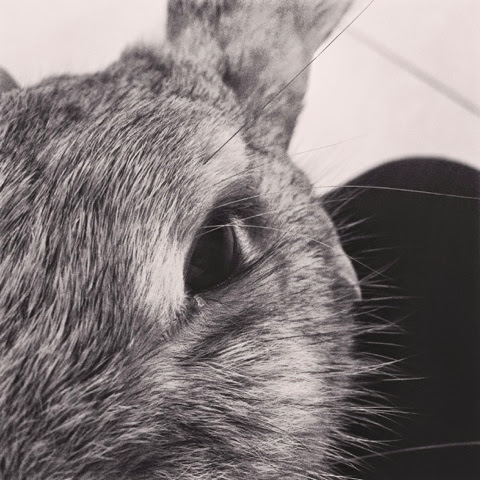 There's this post that I know I have to write on behalf of little Fluffy. After all, this blog is about Fluffy and Bunny. It has been really difficult to string those words, and every thought of it filled with so much bitter sweet memories.

But, I guess as their mama, I'm obliged to write about this experience, as this is a part of life.

Email ThisBlogThis!Share to TwitterShare to FacebookShare to Pinterest
Labels: Dilemma 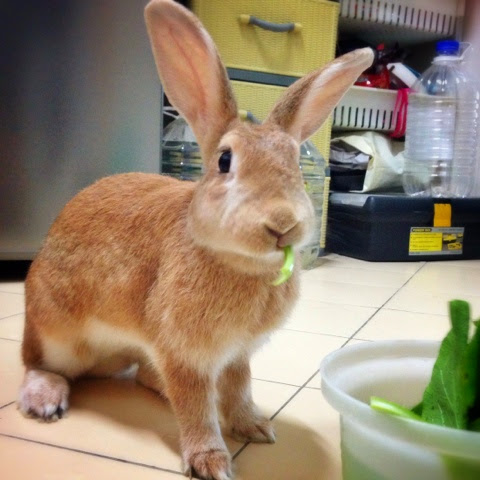 Email ThisBlogThis!Share to TwitterShare to FacebookShare to Pinterest
Labels: Fluffy 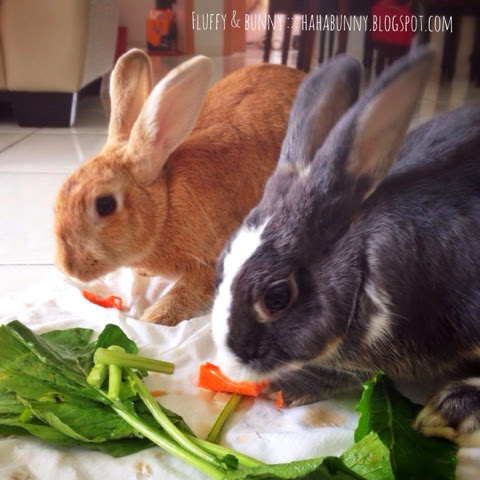 It's our weekly buffet session! As usual, we are served with vegetables, and some treats like this time, its carrots. 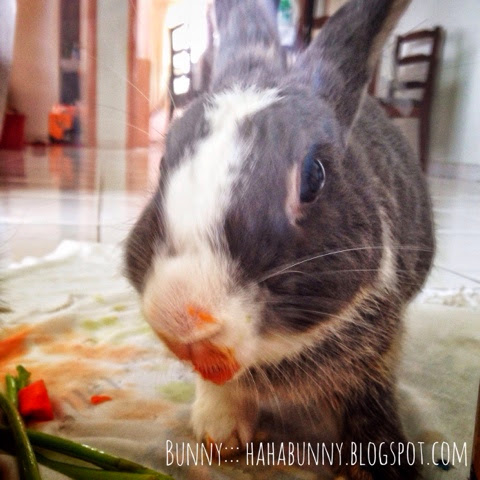 Being the smartest rabbit in the whole wide world, Bunny eats all the carrots first. Carrots are delicious! Carrots are orange in colour, looks attractive and tasted sweet and crunchy. Bunny don't know why mama loves watching Bunny and Fluffy during our buffet session. Mama just can't leave us alone!!! Bunny wonders why! 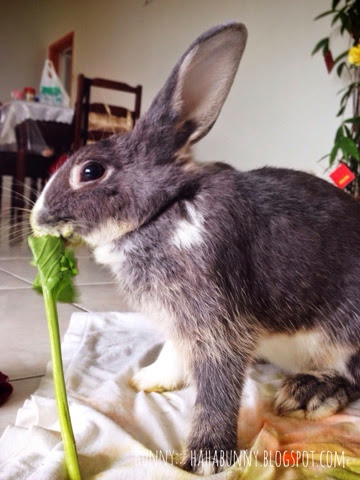 After carrots are finished, then only Bunny will attack the vegetables. Bunny dislikes vegetable stalk, they are less tasty than the leafy part. If Bunny has a choice, Bunny would leave the stalk away. But momma wont feed us until all stalks are finished! Bad mama!!! Bunny knows momma doesn't like to eat vegetables too but momma keeps forcing us eat! 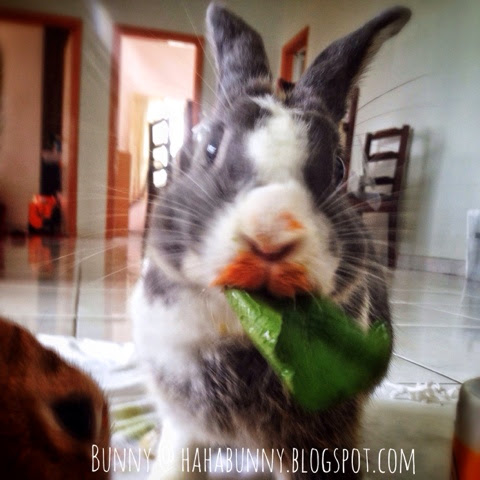 Hey momma?! Are u done laughing at me?
*momma rolls on the floor laughing*
What's so funny with this??
-based on A day's life with Bunny the rabbit-
Posted by MsXeRoZ Nicole at 1:14 PM No comments: 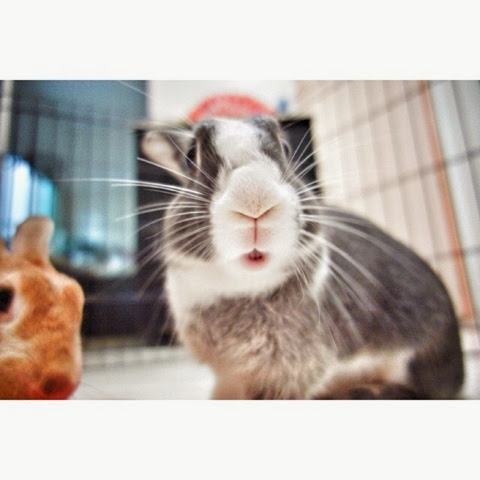 Just a random Bunny post to spread some cuteness around.
Mama is whistling and Bunny made this curious face! Haha
Posted by MsXeRoZ Nicole at 9:37 PM No comments: